“Service above self will be the cornerstone of my administration as Governor,” Nevada Governor Brian Sandoval proclaimed. He joined approximately 70 AmeriCorps members bright and early in Las Vegas, Nevada on Martin Luther King Jr. Day morning to celebrate the Day of Service. 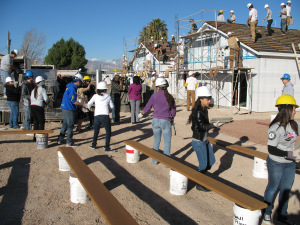 Partnering with Habitat for Humanity Las Vegas, Nevada Volunteers’ AmeriCorps members gathered together to build three special homes in honor of the 25th anniversary of the holiday recognizing one of America’s great heroes, Dr. Martin Luther King, Jr. More than 40 years after his death, Dr. King’s example continues to guide Nevadans in addressing the state’s most critical issues.

The event in southern Nevada brought together AmeriCorps State members from Great Basin Institute’s Nevada Conservation Corps, Luz Community Development Coalition, and the United Way of Southern Nevada, along with AmeriCorps VISTA members serving southern Nevada nonprofit agencies. The Governor jumped in to lend a hand with the AmeriCorps members, at one point even aiding them on the roof by nailing on shingles.

In Reno, Governor Brian Sandoval attended an Internet Safety presentation hosted by The Children’s Cabinet AmeriCorps program, at the Boys & Girls Club of Truckee Meadows. He explained to the parents, children, and volunteers in the crowd, “Every day you should try to do a random act of kindness.” Through these random acts of kindness and paying efforts forward, “it will make all of us better people; it will make us a better community; and most importantly it will make us a great state,” Governor Sandoval stressed. 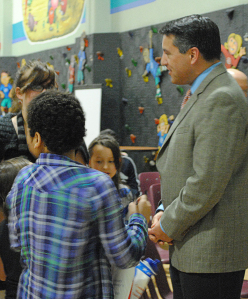 Nevada Volunteers is truly honored that the Governor of Nevada attended both MLK Day of Service events to see the Nevada AmeriCorps members in action.

At the Winnemucca Food Bank, members assisted in packing boxes of clothing, originally donations the Food Bank had received for their thrift shop, but were unable to display and sell. These donations were packed up and sent to the Gospel Mission in Reno, who in turn sends them to third-world countries. 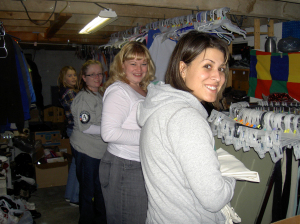 AmeriCorps members helped in sorting and organizing a mountain of clothes at the Frugal Flamingo, a thrift shop where patrons can find trendy trinkets and discounted items such as clothing, books, housewares, and more. The work took the members a couple of hours to complete, but would have taken the nonprofit two weeks. They were able to empty one of the Frugal Flamingo’s storage sheds and separate the clothing into winter wear, summer wear, and items to be donated to the Multiple Sclerosis Society.

Nevada Volunteers is humbled by the service that Nevada AmeriCorps members do, not only on Days of Service, but year round.