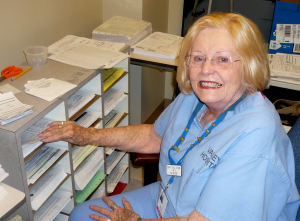 Guest blogger, Beth Bartel, is a Nevada Volunteers Commissioner and a Human Resources Generalist at Valley Hospital in Las Vegas where she combines duties in Human Resources with management of their volunteer program. She is a Certified Volunteer Administrator and Treasurer of the Las Vegas Chapter of the Directors of Volunteers in Agencies (DOVIA). We are so pleased to have her share an amazing story about a lifetime volunteer at Valley Hospital.

When Geraldine (Geri) Grant began volunteering at Valley Hospital in 1986, Ronald Reagan was president of the United States; the Oprah Winfrey Show debuted; and “Top Gun” was the number one movie.

“I’ve volunteered in Outpatient Surgery for my entire 25 years,” said Geri, who is 83 years old. Her volunteer “career” started when her youngest daughter wanted to be a candy striper. Valley was also seeking adult volunteers, so Geri signed up as well. Now, on Wednesdays, she can be found in the Outpatient Surgery department helping the nurses with whatever they need – making beds, compiling charts, or chatting with patients and family members.


In addition to her Outpatient Surgery duties, Geri also helped with special events over the years, such as fundraising, holiday party planning, and acting as tour guide for schools and scouting groups. “We would see the [Flight for Life] helicopter on the roof, and the kids would get to sit in it – always a crowd pleaser! (The pilot always said he would take me for a ride one day but he never did!) We visited radiology, and the technician showed the children X-rays of items that had been swallowed, like coins and a spoon! We ended with a trip to the cafeteria for a snack or lunch.”

Geri counts many memorable moments during her 25 years of volunteering, particularly celebrating the various holiday parties created especially for the children of employees. “I often brought my own grandchildren to the Easter egg hunts, Halloween, and Christmas parties.” She loved it when her daughters would stop by and have lunch with her in the hospital cafeteria during a shift, and Geri and a former fellow volunteer would always visit the nursery to admire the newest babies.

As she marks her silver anniversary at the end of April, Geri has decided to hang up her royal blue volunteer jacket and her comfortable shoes. “ I’ve always kept busy, and it didn’t occur to me to stop, until recently. And of course, there were the annual volunteer luncheons to look forward to!”

However, Geri has plans for her newfound spare time — helping to care for her newest grandchild (the newest baby of the former candy striper). “We haven’t had a grandchild in 14 years, so I’m enjoying being a new grandmother again. They live with me, so much of my time now is spent helping to take care of her — and I love it! How’s that for retirement plans?”

Even as she retires from her volunteer duties, her heart and mind remain filled with many treasured memories. “I love all the volunteers I’ve worked with and many have become my best friends. The volunteer managers have all been wonderful —Linda, Dena Dzierbicki and Beth Bartel. And last, but certainly not least, all the doctors, nurses, and other staff from top to bottom have been great. The Outpatient Surgery nurses and staff are just like a second family, and it will be a very sad day when I leave them. Thank you for 25 great years!”

For the record, Geri has six wonderful children (and their spouses!), 22 grandchildren and 16 great-grandchildren!