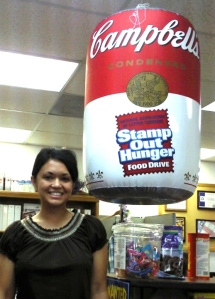 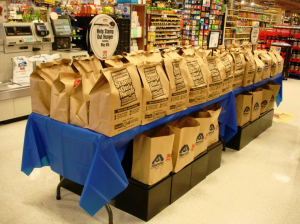 Natalie Minev is a VISTA serving with The Volunteer Center of Southern Nevada. She is a powerhouse of committment and energy, which earned her recognition as the 2010 Nevada AmeriCorps VISTA of the Year. I am so pleased to share her reflections on her year of service.

As I approach the end of my year as a VISTA, I’ve been reflecting on the experiences that have meant the most to me. There have been countless moments throughout the year in which I have interacted with great people and exciting projects in the community. I also experienced the infamous “VISTA slump,” a period of restlessness and confusion during the year. The experience that taught me the most about myself, others, and the community I live in was my culminating project, the National Association of Letter Carriers’ Stamp Out Hunger food drive in Southern Nevada. It was incredibly challenging but deeply rewarding.


Although the Stamp Out Hunger food drive is technically a one-day nation-wide food drive in May, planning for this large-scale food drive began in the early fall of 2009. My supervisor and I attended countless meetings throughout the year to prepare for this big day of giving food to local food pantries. At the beginning of the planning stages, I didn’t really know where I would fit into the implementation of the food drive. However, as my supervisor slowly began building my responsibilities and ownership of the 2010 drive, I began to realize what a large and impactful project I would be working on.

Perhaps the most interesting aspect of working on the food drive was collaborating closely with community partners that each did their part to make sure the largest impact was made by the food drive. We worked closely with the local NALC chapter, which coordinated letter carrier efforts to collect food at mailboxes on Saturday, May 8, the day of the drive. However, we were also part of the exciting new collaboration with Albertson’s/Sav-On in Southern Nevada. By partnering with Albertson’s, we were able to set up food collection sites at 34 Albertson’s stores in Southern Nevada, which collected food for an entire week before May 8.

Additionally, we worked with Goodwill of Southern Nevada on the media promotion of the drive, which helped increase widespread public awareness about the drive. Finally, it was my job to interact with and screen all the food pantries that wanted to be recipients of the Stamp Out Hunger food drive, as well as all 392 volunteers that wanted to help the efforts at the Albertson’s stores, including Girl Scout troops! Working with such an amazing variety of individuals and groups was very interesting and eye-opening.

The end result of all our hard work together was an amazing amount of food for the community. The official total amount of food raised by the drive was a whopping 401,922 pounds of food. This includes over 40,000 pounds of food collected by the Albertson’s stores around the valley. Because of everyone’s hard work together, hungry individuals and families in the community will be given food for months to come this year by 22 food pantries in Southern Nevada.

The food drive wasn’t perfect. For one, we needed more volunteers, and it was certainly a bit overwhelming to manage 34 Albertson’s stores for an entire week. It was truly a learning experience for everyone involved. For me, it was a large personal and professional challenge that helped me grow as a person and feel more confident heading into law school, which is where I am going next after I finish my term in June. I am deeply grateful for the experience of working on such an amazing food drive with such a diverse and inspiring group of individuals in my community. It was definitely the highlight of my year!