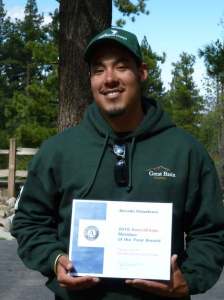 Dannyn Smith was awarded Nevada AmeriCorps Member of the Year in 2010. Why? Take a moment and read about his AmeriCorps success story!

Dannyn had just graduated from high school when he signed up for the Nevada Conservation Corps AmeriCorps program, which works throughout Nevada on public lands doing field research and conservation service. “Entering the Corps at 19, I was unsure of myself and did not know if I had what it took to fulfill my commitment.” Dannyn embraced the challenge, working 10 hour days in rain and freezing temperatures, carrying tools weighing up to 25 pounds for miles in and out of a trail. He never complained, in fact he flourished. Before the end of his first year, his natural leadership skills became apparent. Dannyn was promoted to Crew Leader and then Senior Crew Leader in his second year, making him the youngest person given a supervisory position in the NCC program.

Dannyn says, “While volunteering, I am most proud of wanting to give whatever project I am involved in my fullest attention.” And he certainly has as an AmeriCorps member. Despite his age, he found he had the ability to mentor crew members who were older, raise morale, mediate conflicts, and motivate his crews to perform their difficult tasks. His teams have built and maintained over 30 miles of trail, removed invasive species from 1,000 acres of public land, and reduced hazardous fuels on over 30 acres of public land.

Dannyn loves giving back to the world that provides him with so much. “Volunteer work has enriched my life on a grand scale. There is nothing I would rather do than be part of something bigger than myself.” And in doing this service, Dannyn has found inner strengths and abilities he was unaware of. “Being a leader has helped me step up and lead my own life.”

Help us do so by donating securely at JustGive.org: